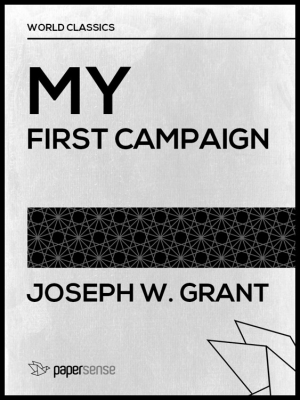 The snow storm of November 7th came upon us quite unexpectedly, leading us to think we had journeyed in the wrong direction, and instead of being in "Dixie" had approached the north pole, and were already in the immediate vicinity of it. There were some wry faces about the camp, though most seemed amused at this unlooked-for event, joking among themselves at the idea of making snowballs in Virginia before Rhode Islanders could get the necessary material—"enlisting under false pretences," &c.

From November 8th to the 12th, nothing of unusual interest occurred, our time being taken up in drill, and in other necessary duties connected with camp-life. November 13th, the entire regiment was ordered to be in readiness the following morning, for picket duty, with two days' rations. The appearance of the sky, the night of the 12th, was threatening, making us already feel, in imagination, the discomforts of this duty in a storm, with no other shelter but the broad canopy of the heavens, excepting, perhaps, a paltry one of bushes, affording indeed but little protection from the pitiless storm.