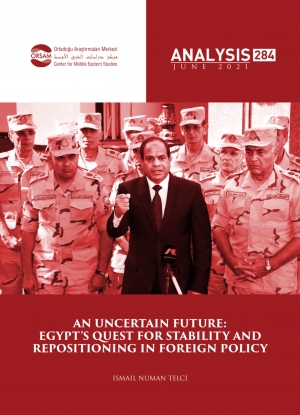 Relations between Egypt and Turkey have always progressed on a sustainable trajectory since the establishment of ties in 1925, despite ups and downs during specific periods. The deterioration in bilateral relations that began with the military coup in Egypt in 2013 and the years-long diplomatic stalemate show signs of softening. In 2020, there were several occasions where Turkish and Egyptian officials announced that formal closed-door meetings were being held between the diplomatic and intelligence officials of the two countries.

In addition to that, specific dynamics of the two countries, the impact of regional developments, and the roles of external actors should be taken into consideration in the analysis. For instance, the competition in the Eastern Mediterranean is becoming a wearing and unsustainable process for both countries. This aspect of the conflict can be shown as an important dynamic of the normalization process between the two. While Turkey does not prefer the strengthening of the alliance against itself in the region, Egypt accepted that there could be no equation in the Eastern Mediterranean that does not include Turkey. A similar situation is also the case for Libya. The gradual strengthening of Turkey's position in Libya and the insistence of Haftar's forces, supported by Egypt, on an endless unsuccessful campaign forced Cairo to change its policies. In addition, the Gulf’s dubious approach to Egypt, the potential of the dam crisis with Ethiopia to deepen, and the insufficiency of the Egyptian army in the fight against terrorism in the Sinai region threaten the future of the Sisi administration and force the Egyptian administration to seek more urgent solutions. Therefore, Egypt's initiatives in the normalization process with Turkey can also be considered as Cairo’s search for a way to tackle its problems regarding domestic politics, security, foreign policy and the economy.

In this context, it is necessary to look at contemporary Egypt to understand the shift in Egypt’s approach to Turkey. Therefore, this study will focus on Egypt’s domestic challenges, foreign policy uncertainties, economic and social problems, and civil-military relations, with an approach that goes beyond the normalization discussions with Turkey.