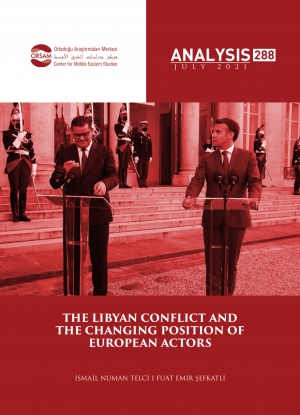 Orsam Analiz Sayı:288 / The Libyan Conflict and The Changing Position of European Actors

The intervention in the political processes in Libya of some EU countries, especially France, Italy and Germany, has recently gained a new dimension, and has become clearer in the following period when Abdul Hamid Dbeibeh was appointed as the Prime Minister of the Libyan Government of National Accord. In this sense, the appointment of transitional administrative staff to lead the country to the elections of 24 December at the Libyan Political Dialogue Forum held between 1-5 February 2021 in Geneva under the auspices of the United Nations (UN) has been a turning point with regard to EU countries' attitude in Libya. The Head of the Presidential Council, Mohamed al-Menfi, and the Dbeibeh government, which received a vote of confidence from the parliament on 10 March, attracted significant attention from the European Union (EU) countries in the last two months, particularly from Italy and Greece. While a similar interest was also shown by countries such as France, Germany and Malta in reshaping their relations with the legitimate government in Libya, the situation paved the way for the EU countries to implement new strategies in Libya.

Expressing at every opportunity their support for Libya's reconstruction process and the newly established Government of National Unity (GNU), the EU countries have intensified their diplomatic contacts with Libya while focusing on their own political and economic gains. While some of these countries consider Libya as a security area where they can control the flow of irregular migrants to Europe via the Mediterranean, others aim to provide opportunities for their companies to meet the needs in the reconstruction of Libya. Apart from security and economic approaches, states such as Greece and France tried to balance Turkey in political and military terms and undermine its gains due to concerns over its growing influence in Libya and the security and maritime jurisdiction agreements signed with the UN-supported Government of National Accord (GNA) on 27 November 2019. While Turkey's position remains the same in the face of these initiatives, Ankara maintains its good relations with the GNA in various areas.

Recent activism and transforming policies toward Libya of the EU countries directly or indirectly involved in the Libyan issue are important in revealing these countries’ motivations in Libya. This study focuses on the motives behind the recent Libya policies of countries such as Greece, Germany and Malta, as well as Italy and France, which have a colonial past in Libya, and on what level these countries' Libya policies can be discussed within the context of regional alliance or competition. The study also examines which foreign policy priorities these countries have in the context of Libya, based on their previous Libya policies and in the light of recent developments in the region.