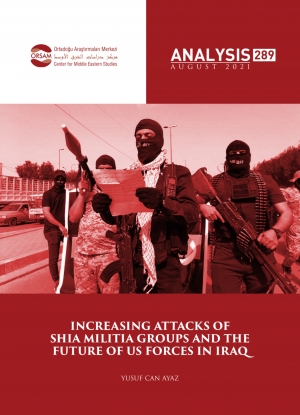 Orsam Analiz Sayı:289 / Increasing Attacks of Shia Militia Groups and The Future of Us Forces in Iraq

The Iraq region has witnessed many conflicts and turmoil with the US invasion in 2003. After 2003, many non-state actors other than the legitimate government have emerged and increased their activities in Iraq. The US, which has withdrawn most of its troops from the region, is negotiating the future of its remaining elements with Iraq as of 2021. The future of the US elements in Iraq will be determined not only by the negotiations between the states but also by the state of play in Iraq. The Hashd al-Shaabi, which was established after 2014 with the fatwa of the Shiite authority Sistani, to fight against the terrorist organization ISIS, plays an important role in the US-Iraq relations as it is integrated into Iraqi politics and the army, and is an influential actor in the country. The assassinations by the US of the Quds Force Commander of Iran's Islamic Revolutionary Guard Corps, Qasem Soleimani, and Hashd al-Shaabi Vice President Abu Mahdi al-Muhandis in 2020 made the US troops and bases the targets of Shia militia groups operating in Iraq. Although the connections and capabilities of these groups beyond the geographical borders of Iraq are questionable, their activities in Iraq have reached a level that can directly affect the security environment in the country. It is seen that the recent attacks carried out or thought to be carried out by the Shia militia groups in Iraq were especially against the US military presence there. An evaluation of the attacks in Iraq, which are still relevant as of 2021, reveals that the attacks are political. In the 2020-2021 period, when the details about the withdrawal of US troops from Iraq were being negotiated between the US and Iraqi governments, and the leaders of the Shia militia groups targeted the US elements in Iraq, the Shia militias received the support of Iran against the 'common enemy’, the US, and increased their influence in the country. The aggressive attitude of the Shia militia groups towards the US elements and the US confrontation with these groups are of great importance for the security and future of the US forces as well as for the stability of Iraq. It is possible to say that the actions of the militia groups may lead to regional conflicts in Iraq.

In this context, this study examines the importance of the attacks on the logistics and strategic regions of Iraq targeted by the Shia militias, for the future of the US forces. In addition, the study attempts to discuss the effects of the Shia militias’ attacks on the Iraq-US Strategic Dialogue on the US military pullback, the future of US-based private companies operating in Iraq, and the influence of Iran in Iraq.