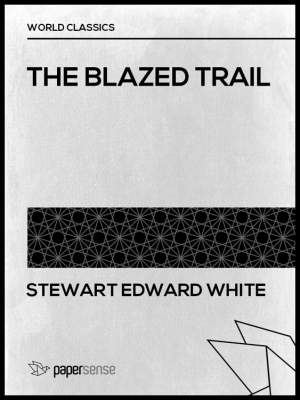 Thorpe and four others were set to work on this road, which was to be cut through a creek bottom leading, he was told, to "seventeen." The figures meant nothing to him. Later, each number came to possess an individuality of its own. He learned to use a double-bitted ax.
Thorpe's intelligence was of the practical sort that wonderfully helps experience. He watched closely one of the older men, and analyzed the relation borne by each one of his movements to the object in view. In a short time he perceived that one hand and arm are mere continuations of the helve, attaching the blade of the ax to the shoulder of the wielder; and that the other hand directs the stroke. He acquired the knack thus of throwing the bit of steel into the gash as though it were a baseball on the end of a string; and so accomplished power. By experiment he learned just when to slide the guiding hand down the helve; and so gained accuracy. He suffered none of those accidents so common to new choppers. His ax did not twist itself from his hands, nor glance to cut his foot. He attained the method of the double bit, and how to knock roots by alternate employment of the edge and flat. In a few days his hands became hard and used to the cold.