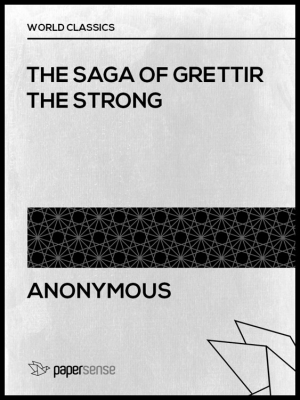 The Saga of Grettir the Strong

There was a man named Onund, the son of Ofeig Clumsyfoot, who was the son of Ivar Horsetail. Onund was the brother of Gudbjorg, the mother of Gudbrand Knob, the father of Asta, the mother of King Olaf the Saint. His mother came from the Upplands, while his father's relations were mostly in Rogaland and Hordland. He was a great viking and used to harry away in the West over the sea. He was accompanied on these expeditions by one Balki, the son of Blaeing from Sotanes, and by Orm the Wealthy. Another comrade of theirs was named Hallvard. They had five ships, all well equipped. They plundered the Hebrides, reaching the Barra Isles, where there ruled a king named Kjarval, who also had five ships. These they attacked; there was a fierce battle between them, in which Onund's men fought with the utmost bravery. After many had fallen on both sides, the battle ended with the king taking to flight with a single ship; the rest were captured by Onund's force, along with much booty. They stayed there for the winter, and spent the succeeding three summers harrying the coasts of Ireland and Scotland, after which they returned to Norway.