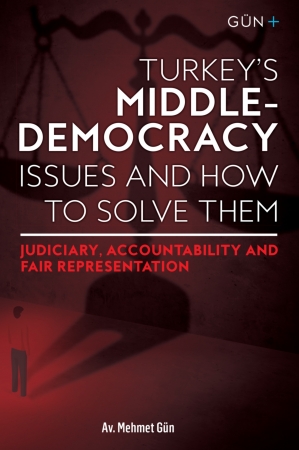 Turkey’s Middle Democracy Issues and How to Solve Them: Judiciary, Accountability and Fair Representation

Ece Temelkuran’s review on Mehmet Gün’s “Turkey’s Middle Democracy Issues and How to Solve Them: Judiciary, Accountability and Fair Representation”

The first time I saw a Tunisian taxi driver counting money in French I was puzzled to hear it – it was someone speaking to himself in a foreign language as if it was his mother tongue. Observing mothers talking to their babies in English in Egypt or Lebanese lovers having a passionate fight in French, got me thinking about how deeply colonialism can be encrypted in individuals’ souls and how Turkish people have no clue about such a predicament. It certainly does not mean that citizens of Turkey have a healthy mental and emotional relationship with the West. After all, we all grew up with the same map in our classrooms in which Turkey was standing between the West, with all kinds of colors, rivers and romantic sounding cities and the East, illustrated as a greyish-yellowish void. The map was the portrayal of the Republic’s worldview, which had set the ideological goal for future generations: forget about the East that we once reigned and look towards the West where all the lively colors and the higher ideals of humankind are. Our psyche was and still is as if in a vacuum – constantly pulled and pushed by the either side of the bridge. Thanks to such a problematic in-betweenness, telling the story of this bridge requires the storyteller to wrestle with several moral questions, the most important one of them being “Am I compromising my country’s dignity or my pride by complaining about my land to the West?” This is a conundrum that neither the countries with an imperial past nor the previously colonized countries have to deal with. And the storyteller has to make a fine distinction between the words of pride and dignity when he decides to speak the whole truth.

In “Turkey’s Middle Democracy Problem”, Mehmet Gün begins to tell the truth by portraying this question and makes it clear where he stands, “I would not wish the publishing of my book in English in London to be perceived as a call for help, because Turkey is mature enough to identify and analyze its own problems and implement its own solutions.” The book sets out its stance from the very beginning by challenging the dominant idea that the West is the sole pioneer and the patron of such concepts dwelling in the pre-Islamic Turkish state tradition, while providing examples from the ancient understanding of separation of powers and the philosophy of justice in Turkic history.   Gün takes one step even further and as a man of law he sets out to offer solutions to the recently globalized problem of the rule of law and authoritarianism with historic references to the shared past of the East and the West. When the book turns to today’s Turkey, Gün focuses on two main problems that recently began to be relevant for Western democracies as well: accountability and transparency. Among his several important suggestions for maintaining accountability and transparency in democracies one might be particularly invigorating not only for Turkey but also for Western countries where rising authoritarianism begins to threaten these two ideals. Gün suggests establishing a Supreme Council of Justice that includes all the participants of the judicial system in order to fortify justice. For those who are used to seeing an increasing number of political science books on Turkey, Gün’s take on the country through the concepts of law, economy and philosophy brings a fresh breath to the literature.

In Gün’s view Turkey has fallen into the trap of “middle democracy”. He borrows the economic term “middle income trap” and explains how a country’s democracy can also diminish over time when higher political standards are not pursued by the state and its society. The book elaborates on the problem by covering a wide spectrum of topics, from the economy to the problems of the inner workings of NGOs in Turkish democracy. This wide spectrum provides the reader with a global view of the country rather than digging deeper only in single area. This ambitious and passionate attempt to tell the whole story of Turkey should be regarded not solely as an individual endeavor. Mehmet Gün is a lawyer, and the founder and the president of Better Justice Association, a respected organization composed of lawyers, legal academics, former judges and others which is rapidly attracting interest from young law students, in particular, from across Turkey, and he is in close touch with several NGOs in Anatolia. The executive summary of the book has been adopted as a policy document by Türkonfed – The Confederation of Turkish Entrepreneurs and Business World- which represents small and medium businesses all over Turkey, and received positive feedback and emphatic agreement from a range of business stakeholders when it was put to them. Therefore the book might better be viewed as the total sum of myriad voices from Turkey that are rarely heard. The book should also be regarded as a moral and political stance against the idea that has been dominant in Western political and intellectual circles for the last two decades: that Turkey is an oriental country that can and should be content with less democracy under an authoritarian regime. Gün’s voice should be heard as the voice of Anatolia –not Istanbul, for a change- that as a matter of fact lasted longer than any sultan. A voice coming to London bearing gifts.