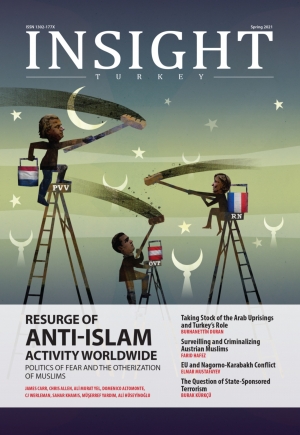 Although most European countries deny the existence of anti-Islam and anti-Muslim sentiment, the evidence on the ground demonstrates that racism and hate crimes against Muslims have become widespread and begun to normalize throughout Europe. Every passing day, racist, xenophobic and anti-Islam tendencies are further entrenched in European societies and institutions. The main concern about the most recent wave of anti-Islam is the fact that the mainstream political parties have begun to accept anti-Islam as a normal position and to use political discourses of ultranationalist and xenophobic political actors. Many Western governments have begun to introduce new laws normalizing anti-Islam outlooks in their countries. When hostility becomes commonplace and discrimination is internalized, all political codes are written accordingly, laws are interpreted similarly, and social perceptions are shaped in the same mould. The process has come to such a point that victimized Muslims are even afraid of complaining about the attacks committed against them. According to a survey published by the EU Agency for Fundamental Rights, only 12 percent of Muslims report anti-Muslim discrimination cases to officials. That is, the available data and numbers, which are already alarming, are only the tip of the iceberg.

Based upon the above explanations, it can be claimed that the anti-Islam trend is largely a Western product and that the Western political actors are largely responsible for the resurge of anti-Islam activity in the world. To put a stop to this situation, European countries and EU institutions such as the European Parliament need to recognize anti-Islam attitudes as a form of racism. European actors should fight against all kinds of discrimination, racism, hate crimes, and human rights violations as they fight against anti-Semitism. The EU should initiate a de-radicalization program in order to re-establish a multicultural Europe. Europe should not surrender to far-right or far-left terrorists, otherwise it will continue to lose its moral superiority. Moreover, unless Europeans take necessary measures against anti-Islam, European states are destined to lose rationality in their policies. This wicked process is similar to a double-edged sword that cuts Muslims and non-Muslim Europeans, as well.

Lastly, in this issue, I would like to draw attention to the concept of anti-Islam, which I believe is a better concept to use instead of Islamophobia, considering that anti-Islam is a more political concept compared with the latter. The Western and non-Western perception of Islam is totally political. Countries that have large Muslim minorities consider the spread of Islam and the increase of Muslims as a threat to their political projects and their way of life. Anti-Islam, similar to any political perspective that targets all members of a religion or ethnicity, is a form of racism.

With these said, the current issue of Insight Turkey brings to its readers four commentaries and six research articles covering anti-Islam practices worldwide while focusing on different dimensions of these activities.

As Muslim communities have been racialized as the ‘Other’ for decades, James Carr provides a comprehensive analysis on how contemporary neoliberal civilizing missions operate at different levels to create neoliberal citizens, while penalizing Muslims that refuse to participate. In Europe particularly, Marcelo Macedo Rizo asserts that the depiction of Islam and Muslims has also been dominated by an ‘Othering.’ He proposes the application of a democratic ‘Alterity’ to overcome the existing harmful European vision towards Muslims.

The impact of far-right parties’ activities and the governmental politics of fear, in general, have resulted in different realities that allowed anti-Muslim hatred and actions to increase. Within this perspective, Farid Hafez explains how the introduction of the notion of ‘political Islam’ by the Austrian People’s Party came to the criminalization of vocal and/or organized Muslims. Meanwhile, in Italy, there is a lack of acknowledgment of Islam and Muslims by the Italian state. Domenico Altomonte argues that anti-Muslim hatred in Italy allows its citizens to conceive an exclusionary populist discourse and a shared negative view that impedes the enforcement of the right to religious freedom. Furthermore, Chris Allen analyzes the existence of anti-Islam activities in the United Kingdom.

From a feminist perspective, Müşerref Yardım and Ali Hüseyinoğlu analyze anti-veil and anti-burqa laws in France by focusing on their historical and social foundations. However, anti-Islam is not only limited to Europe. As CJ Werleman asserts, the rising violence against Muslims in India has brought Muslims to the brink of genocide in India and Kashmir.

As mentioned previously, anti-Islam is mainly politically constructed. This can be understood better when taking into consideration Kristin VandenBelt’s research which compares the experience of Muslims in Europe and Latin America, Denmark and Argentina respectively.

Media is another actor which augments anti-Islam activities and discourse. Within this perspective, Ali Murat Yel’s research article brings attention to Turkish media representation of Islam and its impact on the social antagonization. Furthermore, Sahar Khamis’ commentary focuses on the social media and concludes with a few thoughts on what needs to be done to ensure the success and continuation of efforts to counter Islamophobia.

Besides the pieces that cover the resurge of anti-Islam worldwide, this issue also includes a number of articles that discuss some important issues. Burhanettin Duran, on the tenth anniversary of the Arab Uprising provides a general framework of the developments in the region. Elmar Mustafayev looks at the stance of France on the Second Karabakh war between Armenia and Azerbaijan from the angle of the norms and values of the EU. Migration has been the subject of the political developments in Europe lately. Within this context, İbrahim İrdem and Yavor Raychev examine the use of coercive engineered migration as a hybrid threat during the 2015 EU refugee crisis. Lastly, Burak Kürkçü in his article questions the state sponsoring of the terrorist operations of the Armenian Secret Army for the Liberation of Armenia and the Justice Commandos of the Armenian Genocide.