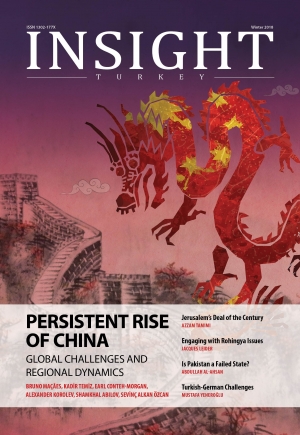 Today, the world system is in a transition and experiencing a deep international crisis. The U.S. has begun to oppose the basic international institutions such as the United Nations and its subsidiary organs and specialized agencies, even though most of these were established with American motivation. The hegemon state, the U.S., has been alienating most of its partners and even allies. The U.S. governments have begun to focus on the national setting and to underestimate the international one; to favor unilateral policies over multilateral ones. The presidency of Donald Trump has expedited this process. American rejection of providing global public goods such as international security and free trade has led to a systemic crisis.

The relative decline of American power coincides with the persistent rise of China. Those who claim that the days of Pax-Americana are numbered assert that the rise of China will determine the future of the world system. China has begun to expand its influence worldwide. For this purpose it has established alternative political and economic international institutions such as the Shanghai Cooperation Organization (SCO) and the Asian Infrastructure Investment Bank (AIIB). Furthermore, China leads the establishment of some other international organizations as well. BRICS is only one of these formations challenging the political hegemony of the West, led by the U.S. One of the most promising Chinese projects is the One Belt, One Road (OBOR) Project, aspiring to connect the East (China) to the West (the world markets). It is expected that, on its completion, the OBOR Project will take China to the center of the world economy and politics.

China has been the fastest growing economy in the world for the last thirty years. Its share of the world trade has increased dramatically, recording the highest share in world exports for several years. China has been enjoying economic transactions with all major international actors with more than 200 partners in exports and imports. However, in terms of per capita income China still lags behind the advanced Western countries. Furthermore, according to the calculations made by the World Bank and IMF, Chinese per capita income is still lower than the world average.

China recently began to invest in the political and military sphere in the non-Western world. It has military bases in its near abroad and in the African continent. That is, Chinese economic influence and technological leadership is supported by its political and military power. In spite of the increase in Chinese military and political might, it is careful not to challenge the U.S. and the West. There are several reasons for this policy. First of all, China is aware of its vulnerabilities. It suffers some economic and political inconsistencies and weaknesses. For instance, it has to fortify its regional dominance first in the South China Sea and achieve its longtime one-China policy as a precondition for a possible global hegemony.

Second, China wants to win the global rivalry without resorting to war with the current hegemon. Therefore, Chinese leaders refrain from opposing the American hegemony politically. Even though it has introduced some international institutions, the Chinese leadership does not propose a political and diplomatic alternative to the West. It will take time for China to offer a full-scale global leadership alternative to the world, since the global hegemony requires not only economic and military power but also values and norms for cultural hegemony. Lastly, China is not ready to take the global responsibility, since it brings high costs. As long as the current American hegemony works in favor of China, there is no need for China to change the course of its development.

In the light of these developments, this issue of Insight Turkey focuses on some of the most important topics related to China’s persistent rise in the international system. More specifically, this issue postulates on how to read and understand China’s policies towards global powers, i.e. the U.S. and Russia, and regional powers, i.e. India and Turkey.

Africa has once again returned to the attention of the global powers after being left for many years in the shadow of western politics. In recent years, Africa has become the center of China’s public, economic and military diplomacy. As it may be expected, China’s investments in Africa are not totally ‘welcomed’ by the U.S. Earl Conteh-Morgan in his commentary focuses on the strategic rivalry between China and the U.S. in Africa. Conteh-Morgan argues that their rivalry has progressed from mild to intense, with both powers increasing their activities on the continent and decreasing Africa’s erstwhile marginalization. Another rivalry that shapes China’s foreign policies in the region is that with India. Especially, since the Doklam Plateau incident in mid-2017, the expectation of a possible tension between the two regional powers is ever present. Taking this into consideration Bruno Maçães, in his commentary, ponders the economic and strategic rivalry between China and India along with a number of dimensions: infrastructure, border disputes, sea power, and trade.